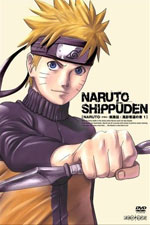 As others in the comics & anime blogosphere have already reported, Viz will be repeating last year’s Naruto Nation in the first half of 2009.

On the manga front, eleven volumes of manga will be released between February and April 2009; after this, the series will go back to its old quarterly release schedule. On the anime front, Naruto.com will start streaming subtitled versions of the Naruto Shippuuden anime, which covers the second half (post-time skip) portion of the manga. ICv2 describes the release schedule as follows:

The new anime streaming initiative kicks off on January 2nd, when eight episodes will be made available, with eight more added each Friday until the catch-up is complete. Beginning on January 15th and every Thursday thereafter, a new episode will be added, only days after its broadcast in Japan.

Various reports on Anime News Network add that TV Tokyo will also be streaming new episodes of Naruto on Crunchyroll an hour after they air in Japan.

To which my reaction is: Wow. That’s seriously cutting the wait time for new anime for US viewers. When I started watching anime a couple of years ago, the wait time for new Japanese series was at least a year, usually more; now we’re down to a matter of hours (for paid Crunchyroll subscribers) and days (for everyone else). This is a distribution model that really could make illegal fansubbing irrelevant.

On the other hand, will we start to see other series distributed in the same way? Or will initiatives like this just be limited to ultra popular series like Naruto? There’s definitely US demand for a wide range of anime series; Naruto is hardly the only series driving fansubbing. (As far as I can tell, Naruto Shippuuden certainly has its share of viewers, but it doesn’t seem to be generating much buzz on anime blogs or fan sites these days.) TV Tokyo is including other series in its agreement with Crunchyroll–and Crunchyroll does have partnerships with Gonzo and Toei as well–but there’s still a lot of in-demand content not being made available through avenues that are both legal and timely.

Anyway, I’ll be interested in seeing how this situation develops.