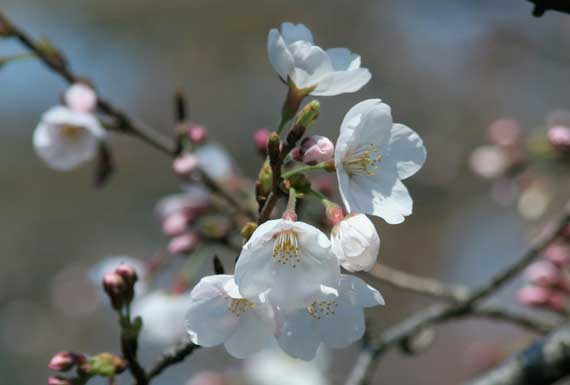 For me, learning to interpret a whole new set of cultural references and symbols is one of the pleasures of reading manga and watching anime. And one of the most widely used symbols in manga and anime, especially at this time of year, is sakura, or cherry blossoms.

Sakura is known for its short-lived beauty. As a result, it’s a symbol of transience and mortality (or, in the words of my friend Oyce, “DOOM”). In art and literature, it’s also linked with Japanese nationalism and samurai. Since sakura blooms in April, it’s associated with spring and the beginning of the new school year. In Japan, there’s also a tradition of flower viewing in the spring known as hanami.

(For more information on the cultural significance of sakura, see Wikipedia.)

So in honor of spring (which has finally arrived where I am living), here are some of my favorite uses of sakura imagery and symbolism in anime and manga.

In no particular order:

1. Rurouni Kenshin: The manga and anime follows the adventures of a swordsman, Kenshin, ten years after the Meiji Revolution; one of the running themes of the series is how how his past continues to haunt his present. So the use of sakura imagery for Kenshin is obvious and appropriate. The imagery is most noticeable in the Kyoto arc, which opens as the sakura is falling in Tokyo; one very significant parting takes place under the cherry trees themselves. This arc is what makes this series memorable for me, so I always remember this part of the story fondly.

2. Bleach: Or, sakura of DOOM, part I. When soul reaper (shinigami) captain Kuchiki Byakuya gets serious about his battles, sakura takes on a particularly deadly beauty. This is especially true during his fight with a certain character in volume 19.

3. Tokyo Babylon and X/1999: Or, sakura of DOOM, part II. Watch out for the deadly Sakurazukamori, Japan’s number one assassin, whose illusions are often preceded by drifting sakura. For an especially memorable use of this motif, see episode 9 of the X anime, “Onmyou,” or the corresponding chapters of the X/1999 manga.

4. Yami no Matsuei: Or, sakura of DOOM, part III. The ever-blooming cherry trees in Meifu symbolize how its shinigami (death gods), who sort out mysteries involving the dead, are all caught for reasons of their between the living world and a a peaceful afterlife.

Sakura is also a common given name for girls and is frequently used for fictional characters. One of my fictional Sakuras is Princess Sakura of CLAMP’s Tsubasa Reservoir Chronicle, who is an alternate universe reimagining of Sakura Kinomoto from CLAMP’s Cardcaptor Sakura. At the beginning of the series, Princess Sakura is very much sidelined in the role of the damsel in distress, but as the story progresses, she really comes into her own.

My other favorite fictional Sakura is probably Sakura Haruno of Masashi Kishimoto’s Naruto. Like 99% of the other characters in Naruto, Sakura is a ninja. Possibly in a nod to her name, her hair is cherry blossom pink. Early on in the series, Sakura isn’t given much to do. She spends most of her time moping after her emo teammate, Sasuke, and warding off the unwelcome affection of her hyperactive teammate, Naruto. But like the other young characters in the series, Sakura grows up and gets stronger, especially over the course of the timeskip between volumes 27 and 28. How could I not love the pink-haired ninja who can split open the ground with a single punch?

Tell me about your favorite uses of sakura symbolism in the comments!