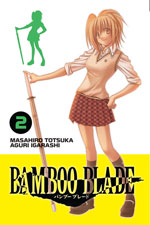 Kojiro, a high school kendo instructor at Muroe High, has made a risky bet in a moment of desperation. If his all-girls kendo club can beat the Machido High club coached by his old friend, Kojiro will win a year’s worth of free sushi. But if Muroe High wins, Kojiro has to surrender a kendo trophy that his friend covets. When volume 2 opens, Kojiro has managed to assemble a team of sorts, led by the quiet but expert Tamaki. But even Tamaki’s expertise might not be enough to carry the rest of the team to victory and save Kojiro from living on instant noodles.In volume 2, the reader gets to spend a little time with the different girls on Kojiro’s team as they train for the meet. Newbie Miya discovers that she enjoys kendo more than she originally thought she would, rather frightening some of her peers in the process, while the elusive Sayako finally stops ditching school long enough to make an appearance at the club. Totsuka and Igarashi also give us a look at the five girls on the Machido team. They have a lot more training than the Muroe team, but they also have more than their fair share of eccentric personalities, which might give Kojiro’s girls a fighting chance after all.

The time we spend with these characters in the days leading up to the meet would be a lot more interesting, however, if the characterization had some more zing. Unfortunately, it mostly ends up feeling flat, perhaps even a bit predictable to anyone who has read other sports manga. For example, the intentional eccentricity of the Machido girls only makes them more forgettable; one wacky character trait does not a personality make. The Muroe students do not fare much better. They do come alive in the rare moments when the story focuses on their interactions–such Sayako’s run-in with Miya, and Kirino and Sayako’s friendship–but those scenes are few and far between.

My biggest complaint about the story, however, is not the characterization but the mangaka’s use of kendo. The best sports-themed manga series succeed partly because they find a way to convey their characters’ love of their sports to the reader. When I read Crimson Hero, Nobara’s love for volleyball jumps off of every page; I get caught up in Crimson Field’s matches because I share her enthusiasm for it. Similarly, when I read The Prince of Tennis, it’s easy for me to believe that the boys on the Seishun team are completely dedicated to improving their tennis games as individuals and as a team; their passion for tennis is simply undeniable. In contrast, when I read Bamboo Blade, I only get the vaguest sense of the characters’ feelings about kendo. The kendo is mostly a background detail, an excuse for interesting costumes and terminology; there’s just one scene involving footwork where the kendo seems like a meaningful part of the plot. Aside from that, this could be a story about a teacher assembling a ragtag archery club after making a rash bet, and it probably wouldn’t be very different.

It’s possible that the treatment of kendo will get better as the series goes on. I’ve come to expect manga series to be a little shaky in their first couple of volumes, and I think Bamboo Blade could improve once the story is not being directed solely by the initial plot device of Kojiro’s bet. At present, however, Bamboo Blade is a likable but otherwise forgettable addition to the sports manga already licensed and available in the states. Borrow this one from a friend if you’re fond of sports manga in general or kendo in particular, but don’t add it to your “to buy” list quite yet.

Review copy provided by Yen Press. The volume features color pages at the front of the book, a page of translation notes, and a short preview of vol. 3.