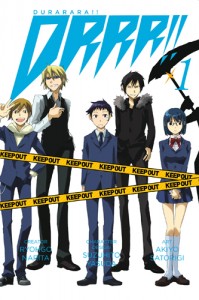 Perhaps the hardest thing about writing a review of Durarara!! is figuring out where to start, because there’s so much to explain to anyone who hasn’t any prior experience with this light novel/anime/manga franchise. It seems woefully insufficient to begin with a simple description of the premise–“When Mikado Ryuugamine moves to Tokyo to begin his high school career at a private school in Ikebukuro, he soon encounters some of Ikebukuro’s eccentric and/or infamous other residents, including the mysterious Black Rider”–because that alone does such a poor job of conveying the rather unusual experience of reading this manga.

Maybe a better place to start–at least for those of you who watch anime–is by noting that Durarara!! shares a creator (Ryohgo Narita) with the anime series Baccano! For those of you who haven’t watched it, Baccano! is a rather wild ride of a series about Depression-era gangsters, immortals, and bumbling thieves with hearts of gold. It’s licensed in the states by Funimation, who has made it available online in various places, including YouTube. The humor is often dark, and the action is extremely violent–to the point that I sort of don’t look at the screen during various points in later episodes. It’s very much a story for those who enjoy narrative cleverness: it follows a huge cast of characters in three separate storylines (with bonus jumps to various other points in the past and future). None of those stories is told in proper chronological order, and there’s various layers of meta-commentary on top of the whole thing by some of the side characters. Some viewers give up after one episode; others, like me, find it absolutely irresistible.

Though Durarara!! differs from Baccano! in that it has a contemporary rather than historical setting, it has much the same sensibility. It also follows an ensemble cast through seemingly unrelated storylines and revels in its own narrative cleverness. In Durarara!! that cleverness is how the regular action of the story is occasionally interspersed with snippets of activity from a chat room. The Ikebukuro of Durarara!! is a place of gossip, rumor, and misinformation, and nowhere is that more true than online, where small incidents grow into urban legends. Durarara!! is also, like Baccano!, possessed of a sly sense of humor, and its turn of events is often quite violent, sometimes suddenly so.

To give you a sense of just how sprawling a story Durarara!! is, here are some the characters featured on the cover who we meet in this first volume. There’s Mikado, our Ikebukuro newbie. Kida, Mikado’s very extroverted childhood friend. Anri, their quiet and buxom classmate. Izaya Orihara, a misanthropic information broker. Yumisaka and Karisawa, two otaku. Seiji, another student at Mikado’s school. Mika, Seiji’s stalker. Namie, Seiji’s creepily affectionate elder sister. Simon, a black Russian sushi chef. Shinra, an unlicensed doctor. And Celty, the Black Rider.

I came into this volume of Durarara!! as a huge fan of Baccano! and with about two-thirds of the Durarara!! anime under my belt. (It was available on Crunchyroll for a period of time when it first aired in Japan.) So it was very easy for me to follow the story in this volume, since I already knew what was going to happen. However, I was pleasantly surprised by how well the manga captured the kinetic energy of the anime, from Kida’s incessant talking and posing to Celty’s mysterious black smoke. Much of that is due to the art, which does a great job of highlighting both the funny and unsettling moments in the story. And even without the benefit of voice actors (and the Durarara!! anime has some great ones), the different personalities of the characters come shining through in their dialogue and their body language. Even though many of these characters only make very brief appearances, it’s more than enough to give you a sense of who they are.

If you don’t mind a certain level of self-awareness in your storytelling, Durarara!! is definitely worth giving a try. Volume 1 offers a lot of questions and few answers; it’s certainly intriguing enough to hook a reader who hasn’t encountered the story before. I’m personally looking forward to volume 2 . . . and more than a little tempted to track down the anime dvds, so I can find out what ending I missed by never finishing the series way back when.